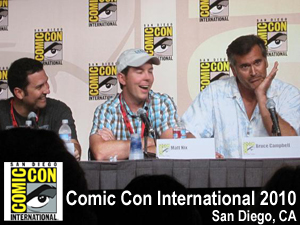 1:00-2:00 USA Network's Burn Notice— Bruce Campbell (Sam Axe), Matt Nix (creator and executive producer), and Alfredo Barrios, Jr. (executive producer) host a panel discussion and answer questions about the creative process of evolving an embryonic idea into a finished episode of cable's #1 show. Fans will gain an intimate look inside the world of Burn Notice, complete with war stories from the writer's room and filming on location in Miami. Exclusive video content will include tips on how to survive Comic-Con from your favorite burned spy, Michael Westen (played by Jeffrey Donovan), highlights from all four seasons and an exclusive sneak peek at upcoming episodes. Ballroom 20.

Bruce will only be appearing for the Thursday Panel. He will not be there for the whole weekend.

Plans are already underway for the 41st annual Comic-Con International San Diego, July 22-25 (with Preview Night on July 21), at the San Diego Convention Center. Click here for information on the special guests who have already confirmed for Comic-Con 2010. Plus, hotel reservations are now open. As Comic-Con gets closer, hotel rooms do free up. We urge everyone who plans on making a hotel reservation for the event to keep checking the hotel registration site for updated room availability. If you don't get your first choice on March 18, check back later to see if the hotel you prefer is available.