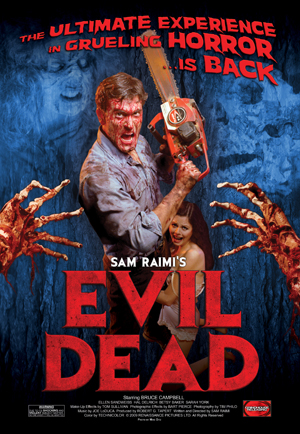 HOLLYWOOD, Calif. – Grindhouse Releasing has set the first dates for its big-screen revival of Sam Raimi's EVIL DEAD, scheduled to begin in January 2010.

Landmark Theaters will present the director's 35mm print of EVIL DEAD at special midnight shows in Minneapolis, Denver, Seattle, New York, Houston, Dallas, and Los Angeles in the first quarter of 2010. The 1981 horror classic will also play the Alamo Drafthouse in North Austin, and a big EVIL DEAD celebration is planned in Portland, Or.

“We've had tremendous response to our announcement that EVIL DEAD has returned,” says David Szulkin, head of theatrical bookings for Grindhouse Releasing. “We want to show it in as many cities as we can, and encourage fans to contact us and petition their local theater to screen the movie.”

“Nothing can prepare an audience for what they are about to see, because nothing punishes an audience like EVIL DEAD -- especially on the big screen,” says Bruce Campbell. “I’m really glad it’s back. People are gonna be hurt.”

The first dates and venues are below.

More cities will be announced as they are confirmed. For bookings and publicity, e-mail David Szulkin