MY NAME IS BRUCE - SFX Magazine

Bruce Force
The star of The Evil Dead directs his own biopic. In a way…
SFX 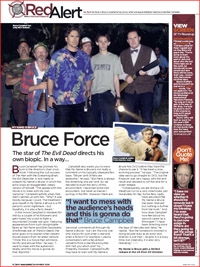 Bruce Campbell has plonked his bum in the director’s chair once more. Following the cult success of The Man with the Screaming Brain, the Evil Dead star is now ready to unleash My Name is Bruce, in which the actor plays an exaggerated, sleazy version of himself. "The appeal with this movie is to mess with my own 'persona'," Campbell admits when Red Alert catches up with him. "Why? It was mostly because I could. The treatment I give myself in My Name is Bruce is a PR person’s worst nightmare – but, hopefully, it is also a fan’s dream."
In the movie Campbell is mistaken for Ash by a couple of his followers and gets roped into a plot to fight a resurrected Chinese war god. Featuring appearances from such recognisable faces as Ted Raimi and Ellen Sandweiss (the female star of The Evil Dead), the actor goes on to explain what viewers should expect from his latest venture. "I think this is a movie that will shock, horrify and amuse folks,” he says. “I want to mess with the audience’s heads, and this movie is gonna do that. Big time."
Campbell also wants you to know that My Name is Bruce is not really a comment on his typically obsessed fan base. "99 per cent of fans are awesome," he says. "But there is always the remaining one per cent. So we decided to build the story of this around them. I have had some odd encounters, but never as bad as I portray in the film. However, there are 'personal' comments all through My Name is Bruce – but I am the only one who knows for sure what is real and what is fiction! For example, I used a conversation with a fan almost verbatim from a real life encounter. Will I tell you which one? No…" Presently, however, Campbell buffs may have to wait until My Name is Bruce hits DVD before they have the chance to see it. "It has been a slow, evolving process," he says. "The original idea was to go straight to DVD, but the financier was very happy with the end result and decided to roll the dice for a wider release.
"Consequently, we are doing a US theatrical run on a very small scale, just like Bubba Ho-Tep. Some fans, sadly, have assumed that My Name is Bruce has been 'shelved' but nothing is further from the truth." And how does Campbell now feel about his second career as a filmmaker? "I have been directing since the days of Hercules and Xena," he replies. "But the homework involved in doing double duty as an actor and director is just that – double. It is a busy time, but creatively, it is also very liberating."

My Name is Bruce gets a limited release in the US from 30 October.